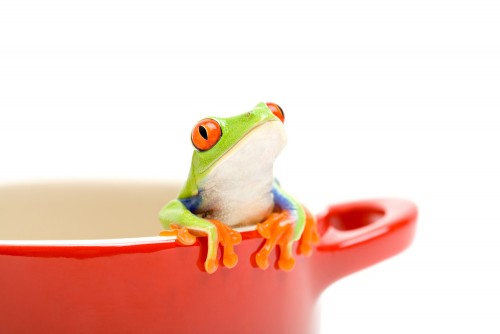 You have probably heard that old story bandied about in management circles about two frogs. One is put into a pot of boiling water and guess what happens? Of course it jumps out…very quickly! (Smart frog) The other frog is put into a pot of cold water which is put over low heat. The heat is then gradually turned up to the boiling point, but the frog doesn’t notice the subtle small changes and allows itself to be boiled to death. (Yuck!)

Now for you animal lovers out there who might be shocked and appalled by this concept – let me rush to say that I don’t know if this experiment was actually conducted or if they used real frogs. But that story started me thinking about us and our similarity to frogs. Many people can slowly subside into a seething mass of mediocrity and it is amazing how easy it is for us not to notice a continuous slow decline in the quality of our lifestyles.

Think of the last time a crisis occurred in your life – something that precipitated a sudden and dramatic change. Although it was terrible at the time, I bet it made you rethink your goals, hopes, dreams, purpose, and the meaning of your life in a big way. Just like being dropped into a vat of boiling water, you’ll make a very quick choice and change!

So should we look at something that forces change upon us as bad? Or could we maybe remember to keep the bigger picture in mind? If we played a game and you had to pretend you were looking back on this sudden change from the future, what growth and development did the incident spur in you? Did it change the direction of your life? Or trigger you to do something that you had wanted to do for years, but hadn’t had the courage, impetus, or time to do?

If we want to make changes in our lives, we usually think about making one change at a time – doing it gradually so it’s not too stressful or scary. There is some merit to this idea of course! But maybe there’s also merit in throwing ourselves into “the pot of boiling water” and making lots of changes all at once.

It’s more frightening, more challenging, and probably more stressful – but you might surprise yourself by your resourcefulness and abilities! Often, it takes extreme circumstances to bring out qualities you never knew you had. Difficult situations also help you develop confidence in your feelings, intuition, and inner knowing.

For example, sometimes we are working in a job that we feel is wrong, but we don’t have the courage to “take the plunge” (just to continue the frog/water metaphor!) and do what we feel is right – even if we don’t have another job lined up. A friend of mine has just left her full-time paying job at which she was very successful. But she knew it wasn’t what she really wanted to do. So she decided she would take responsibility for herself, and left. She didn’t just leave and wander aimlessly wondering what she should do. She researched and made phone calls and networked and she had some cash reserves to keep her going. Now she is between jobs and feeling great when we (and she) thought it would be stressful and scary. She is actively searching for her niche and is excited about life like she hasn’t been in years.

A divorce is also a good example of the “boiling water” syndrome. At the time our whole world is shattered. Yet, ask most divorced people five years after the divorce how life is different and the answers are similar. “It was awful at the time, but it’s the best thing that ever happened to me. Since then I’ve …..”

Or deaths. I had the great fortune to travel around Australia with Sarah Henderson who is a really amazing person. There is another example of being thrown into boiling water…her husband died and left her with a million dollars of debt. (It doesn’t get much more boiling than that folks) Since then, she has become a famous author, wise investor, international speaker, and generally has learned more skills than you can poke a stick at!

Sometimes, it’s exhilarating to be thrown into boiling water – whether it’s your choice or someone else’s. This is a good time to ask yourself – how do I view change? Pretend you are looking back from the future. What impact did the Big Change have on your life? What did you tell yourself about it at the time? Perhaps in the present time, we can choose to look on it as a stepping stone (even if it’s a forced stepping stone) and opportunity to test ourselves and our abilities. And to see how good you really are…because it’s usually much better than you ever thought possible!

Your turn – have you had a big change in your life that turned out to be a blessing?

Posted in Stress Management
← Let’s Go on The Journey of Your LifeDelivering Negative Feedback? How to Lessen the Blow →

Thanks for Subscribing to My Free Monthly Tips On

Something went wrong. Please check your entries and try again. 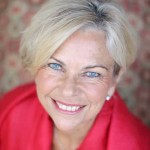 As a communications and performance expert, Amanda believes success in business is always about feelings. The way we feel about a product, organization or person influences how we behave and informs our decisions about how we spend, or how we conduct business. Facts, targets and figures don’t change behaviours - touching hearts, feelings and stories do.

Amanda’s action-packed, but scientifically based performances, offer an abundance of use-it-now tools to handle change and create deep, lasting relationships at every level - with customers, colleagues and family - leaving everyone feeling good about themselves, energised, enthusiastic and re-engaged! 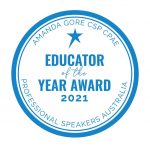